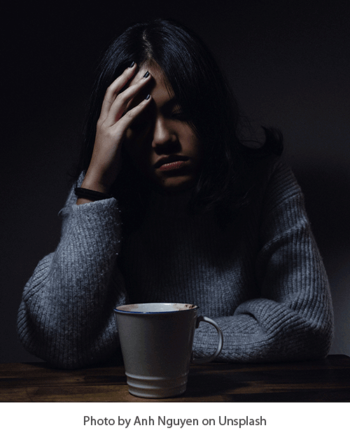 The American psychologist Albert Ellis is credited with coining the phrase ‘stinking thinking’ to describe the human tendency to persistently engage with thoughts that do not serve us.

Maybe you know what Ellis was describing; perhaps you've experienced that moment of awareness when you fully comprehend the direction and meaning of your thoughts. Or perhaps not...

I, for one, can attest to the stealth and power of stinking thinking.  For a long time I believed the world was crap, that I was a victim of every possible dire circumstance - that the Universe was out to get me. And of course, in that self-absorbed and yet (ironically) completely unaware state, whatever I was thinking was my reality. Henry Ford knew exactly what was going on for me when he said: 'Whether you think you can or you think you cannot, you're right.  It took a major event in my life to prompt me to start paying attention to what was going on between my ears.

Leadership authority (and my business coach), Robin Sharma, articulated a three-step success formula many years ago. It's brilliant in its simplicity and speaks volumes about what we might achieve as human beings:

Of course, zero awareness makes it practically impossible for us to make conscious choices that may create better results; in that scenario any improvements in our state of being will likely be the result of someone else's efforts, or blind luck. And that lack of awareness also fits neatly into Albert Einstein's definition of insanity, wherein we continue to think/do the same thing over and over again - all the while hoping for  a different outcome.

In my experience, the prerequisite to any shift in thinking, emotions, behaviours and outcomes is awareness.  As long as we remain blissfully (or otherwise) ignorant, we are powerless to change.

Which leads to the obvious question: "So, how do I become more aware of my thoughts?"

My first genuine epiphany occurred because I met someone who thought very differently to everyone else I knew - and they were sufficiently aware and compassionate enough to challenge me to do the same.  Since then, I've re-integrated into my life one of my reasons for being on this planet in the first place: to learn more about who I am, to be more aware of what I am thinking (and why) - and to make more deliberate choices about how I show up in the world.

Of course, I'm far from perfect at this and expect that I'll still be improving on my final day.  I'm also incredibly grateful that, having gained the awareness that I can control and redirect my thoughts whenever I choose, I get to make more choices every day that move me towards the best possible version of myself.  I don't know what that looks like yet, because I haven't got there - and perhaps never will. But I do know that this journey is infinitely more valuable, satisfying and contributive to a better world, than my earlier incarnation as the world's angriest dropkick!

I'm not suggesting that you should never have 'negative' thoughts, that you should train your mind in future to only ever think happy, positive, sunshiny rainbows and butterflies thoughts. However there's a growing body of research to strongly suggest that adopting a more-positive mindset (ie. pattern of thinking) contributes to greater well-being, happiness, resilience and success.

Rituals I use to build greater self-awareness around my thinking include daily journaling and meditation.  Yes, I can still remember when my eyes would roll back in my head and my ego would fire-up the moment anyone suggested to me that I meditate or keep a journal. Yet years of sometimes inconsistent practice and perseverance have convinced me of the benefits of both. Meditation is brilliant, not because it teaches how to stop thinking (something I doubt is possible while conscious), but because it teaches you to to direct your thinking.  You begin to realise that you can control the direction of your thoughts in any moment or circumstance.

Journaling has provided similar benefits, because it prompts me to reflect on my thoughts from (say) the day before, whether those thoughts had served me and, if not, how could I have directed my thinking to gain a better outcome?  Over time, I've had many people tell me (but they tell themselves first) that 'journaling is not for them'.....  so, they're right.

If I can share a final quote with you, it's another gem from Mr Einstein: 'We can't solve problems by using the same kind of thinking we used when we created them.'  I choose to interpret this as a reminder that, to create a better life (eg. one that doesn't include some or any of the problems or challenges that exist today),  I can only begin by changing how I think about my existence.

If you want to create a better life for yourself - whatever that means to you - what's your plan for achieving that?

I'd love to hear how you have banished your own stinking thinking.