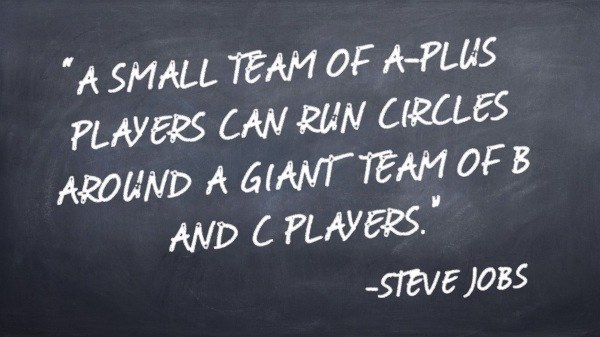 A legend by the age of 30, tons of pages have been written about his creativity, innovation, intensity and focus. Sometimes called a tough manager and unforgiving, but always non-compromising and single-minded about his vision.

So much can be learned from Steve's two stints at Apple and his leadership style that transformed a faltering computer manufacturer bordering on closure into the creative powerhouse that became the planet's most valuable company.

Here is what John learned about the great man:

<strong>1. He was intensely curious to learn more about his leadership style, gaps and to improve himself</strong>
Unlike some of the popular caricatures of Steve as a difficult manager, he was curious to discover more about himself: how he came across to others and how he could be more effective as a leader. He was becoming more aware of his style, how it could limit his impact and how to make changes.

<strong> 2. He put together an incredible A-team of leaders</strong>
As a direct outcome of his enhanced self-awareness, Steve put together a team of incredibly talented and diverse leaders that perhaps only he could have led. In each functional area – design, marketing, sales, operations, software, hardware engineering – he brought together people with game-changing vision and talent. Steve served as the glue for the team, keeping them focused on a larger vision, moving ahead relentlessly. Unlike many other leaders, his choices were not compromised by personality, personal preferences or other considerations. He brought together people like Jonathan Ive, Ron Johnson, Tim Cook, Avie Tevanian – indisputably the hottest talent around – and they delivered.

<strong>3. He was a lot more people-focused</strong>
Steve was a lot more people-focused with a highly nuanced knowledge of motivators and drivers of people and teams. He built reward schemes and constantly encouraged his teams to aim for the highest performance standards. He created a great environment for the best talent to thrive in and had a relentless focus on excellence – a balance few leaders can strike at such a high level.

<strong> 4. He was becoming keenly aware of his own limitations</strong>
This demonstrated his evolution as a ground-breaking leader. He became aware of his own limitations as a leader and worked with his trademark intensity to make progress. He became a better listener, he gave more freedom to others and created multiple projects for his leaders to succeed. At the same time, he eliminated bureaucracy and anything that threatened Apple's pursuit of its vision.

<strong> 5. He built a self-sustaining and winning institution</strong>
For the longest time, it seemed as if Apple was Steve Jobs. Articles and analyses were written about how the company could not survive without the vision of its famous co-founder. But Steve proved skeptics wrong by building an enduring institution that bears his innovation DNA and continues to make strides as the world's premier technology company. He did this by:
• building a unique culture
• institutionalizing a process of hiring and rewarding the best talent
• growing their very own product development process.

<strong>Here is what John Mattone says about his experience of coaching Steve Jobs:</strong>
"As a coach who interacted with Steve, I am humbled and feel privileged to have witnessed this amazing turnaround and success story."

<strong> What is your own success story?</strong>
How will you build your team? How will you become aware of your own unique mix of gifts and improvement areas? How will you prioritize and develop your leverage points?

Experience this unique journey with John in his immersive 8-month <a href="http://johnmattone.com/intelligent-leadership-program" target="_blank" rel="noopener"><strong>Intelligent Leadership Program</strong></a>:

Here is a quick look at what you get:
• complete the same MLEI assessment that Steve Jobs took
• join a global cohort of leaders and learn collaboratively
• assess your growth through the Talent Watch surveys (before and after)
• the option of one-to-one coaching with John!